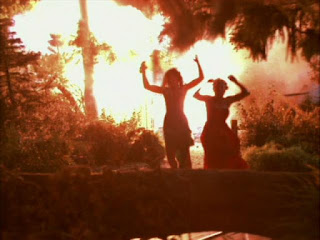 Covering “Beauty and the Beasts” and “Homecoming,” in which these hands could be cleaner.


Tellingly, here we have a piffles and an episode that kinda sucks, but I still found a lot to munch upon.
So, when I said there was only one season 3 episode I wasn’t looking forward to, I meant “Beauty and the Beasts.” When I said the show works best when there’s subtlety to the metaphor, I was also thinking of “Beauty and the Beasts.” Its main thrust is Dr. Jekyll and Mr. Hyde as a parable of intimate partner abuse, which isn’t something you can call a “spin” or a “take,” it’s just pretty much the text. While it may have seemed like a good idea to use Scott Hope to allow new characters to enter the scene, Debbie(?) and…Steve? Joey? Pete! It’s Pete. Obviously the two don’t have the depth to raise the Jekyll Hyde Abuser story above the After School Special level, or to hide how nonsensical the story is. Expository dumps at the end of episodes are never a very good sign on this show (see “Ted”), but what we’re told in this one is garble, even by the generous standards I half-heartedly hold the show to—Pete made his Hyde formula, we’re told, to be the kind of man (he thinks) Debbie wants, but for one it’s hard to imagine the veiny orange beclawed rage-freak Pete transforms into would get anyone’s motor running, but Debbie hardly seems like someone who would be drawn by a manly man (it’s also hard to get a proper read on Debbie’s character as she’s here mostly as a broken, terrified victim) in the first place, and the whole Jekyll and Hyde thing just ends up feeling too glib. One might read Pete’s choices as being rooted in jaundiced societal notions of masculinity, but the episode doesn’t make that case, because it doesn’t make any case, really. Again, it’s just the strange case, but in place of a Victorian doctor there’s a teenage piece of shit. Things get extra muddied when the eponymous beasts are taken into account—Oz and Angel.
Oz is a werewolf, as we all know, and werewolves make for, among other things, potent symbols of succumbing to unrestrained id. In fact, our three beasts all are in their own ways, be it werewolf Oz’s animal instinct, Pete’s unthinking rage, and Angel’s lack of a superego—or that would be the case if this were Angelus, but it’s just a mysteriously feral Angel, which just goes to show how muddy this is. Anyway, back to Oz. Connecting Oz with Pete and Angel seems particularly unfair, as he’s only ever been a nice guy (not a Nice Guy). Any subtext on Nice Guys and what we may cutely call “Schrodinger’s Abuser” was better done in “Phases,” here lycanthropy is treated more like a chronic illness, as Willow struggles to deal with her boyfriend’s condition, despite the fact that he must deal with it alone.
There was probably something about this disparate girls dealing with their boys in there, but the episode never becomes particularly coherent in its intentions. It does at least come together enough to have a pretty sweet, chaotic climax, as Oz runs afoul of Pete, Pete runs afoul of werewolf Oz, Giles gets tranqed, Faith gets to show off some competence, and finally Pete runs fatally afoul of savage Angel.
Buffy struggles to offer solace to Scott, but it doesn’t matter much because as far as I can remember, he’s gone after “Homecoming.” The only thing deep about “Homecoming” is its silliness, and make no mistake, it is deeply, profoundly silly. It hinges on a characterization of Buffy, as the Queenest of the HS Queen Bees, that actually predates everything we’ve seen of her (apart from a few minutes of “Becoming”), and, well, I wasn’t exactly profoundly invested in high school culture, but I don’t recall campaigning for Homecoming Queen anywhere near the zeal displayed here—I don’t recall campaigning at all, in fact. Still, this, one of the rare times the rivalry between Buffy and Cordelia really was dug into, and thus one of the rare times Buffy got to be a real girly girl, is a lot of fun, and that’s even before the two are beset by Mr. Trick’s cavalcade of assassins. There are mistaken identities, hilarious deaths, explosions, and ironic voting results.
In some ways, the episode’s trivialness matches well with the trivialness of Buffy’s quest—Willow is pretty accurate in saying that Cordelia “needs this” more. The triviality is the point, of course, because the chance to be trivial is something Buffy will never get again. This is ground that’s been trod before, but this time her yearning fully drives events. Until, again, assassins, which leads to Cordelia displaying her own sort of value by basically creating value through sheer force of will and charisma (da-doom-skiss!).
Also, Willow and Xander start struggling with their mutual attraction, something that’s been backgrounded for quite a while. Trying on formal wear in the same room while listening to Lisa Loeb? Huge mistake, privacy screen or no.
And we meet the Mayor, mentioned on occasion in the past, who is aware of the supernatural forces at work in his town, but whose intentions remain mysterious. Are they ill? They’re probably ill.
Posted by Kel V Morris at 8:04 PM