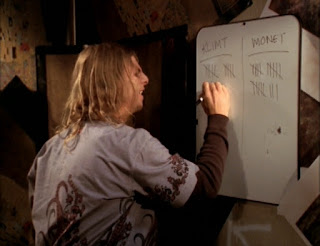 Covering “The Freshman” and “Living Conditions,” in which college hijinks ensue.


Let us take a moment to praise one of the best jokes the show ever did: the Klimt v. Monet tally. It’s really great, probably more than anything because it’s keenly observed and accurate to the college experience at the time. Do they still have those huge poster sales? Because they sure did when this episode aired, and they sold a lot of copies of Water Lilies and The Kiss. I went for the Reservoir Dogs still, personally. Sunday’s vampire gang tallying the cliché posters is funny, and detailed to the college experience.
If my memory’s right, it’s one of the few that is so.
Both Buffy and Buffy were going to have to eventually leave high school, which wouldn’t be a huge issue because for many, college is waiting right there after it. This would force an evolution of the show, but not any huge changes—instead of classic high school issues supernaturally twisted, they’d be college issues. Thing is, though, well, there are a lot of things. For one, many college issues aren’t too different from high school issues, they’re all just issues of growing up. But there’s also something elemental about the high school experience, a commonality that’s easy to tap into, and a specificity that doesn’t change too much. But there’s less universality to the college experience, and, well, if I’ve remembered these accurately, many of the college details feel more pulled from stories about college rather than actual college, and would often feel outmoded and out-of-touch. Like the poorly attended political rally Buffy walks by on her first day. “What do we want!?” shouts the leader into a megaphone. But the response is an indecipherable murmur.
High school is a real pressure-cooker, with everyone stuck with each other in the same small conglomeration of buildings—hence all the dark jokes about the casualty rates at Sunnydale High, and the many ways the students and staff rationalized. The bullying sports teams and queen bee bitches couldn’t be avoided, so we all have experience with them. But college is so much larger, so much freer, and so much more diverse, someone could easily vanish without anyone suspecting anything was amiss, if they noticed at all.
These first two episodes of the season do a pretty good job at convincing that there may be something to the college setting. Buffy often feels inadequate, but that inadequacy is pretty well justified in “The Freshman,” as she struggles to adapt to that aforementioned size and lack of guidance. She’s adrift and confused, while suddenly Willow is confident and in her element, in an environment that seems designed to make her feel insignificant. It’s been advised she resume her secret identity, but with so many people on campus, would anyone know she was the Slayer even if she didn’t try to hide it, and of those who did, would they care? Sunday’s gang doesn’t. Their contempt for Buffy speaks to this truism—no one cares how cool you were in high school, except, of course, for you. They may not care about the Class Protector award, but Buffy sure does, and that leads to her concluding she actually can do this college thing.
Pour one out for Oberyn Martell, I almost didn’t recognize you without your rock star swagger.
“Buffy’s roommate is a demon” is a pretty simple pitch, and almost certainly the pitch for “Living Conditions.” Difficult roommates, dealing with the fact that you now share space with someone from a very different background than you, that’s probably going to be an evergreen college experience. Kathy’s persnickety habits and Buffy’s mounting madness in the face of them is all pretty hilarious, particularly since everything Kathy does is just ever so slightly more exaggerated than typical bad roomie behavior. Of course, any thinking person in such a situation has had the worst thought of all occur to them—what if I’m the one that’s the problem? Probably the cleverest bit is the reveal at the end which hints that Buffy’s irritability had less to do with Kathy’s soul-sucking spell than she might like.
Cleverness is going to be the season’s saving grace. Consensus holds that Buffy’s college years aren’t as consistent as her high school days, as the writing crew never quite got a hold on how to make that transition. At the same time, many of the episodes coming up are some of the best the show ever did, as, perhaps to compensate, they show a real playful, clever creativity and some brave experimentation. College, after all, is supposed to be the place for that sort of thing.
Posted by Kel V Morris at 7:45 PM