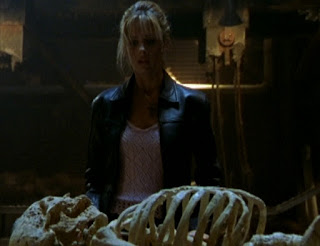 Covering “When She Was Bad,” and “Some Assembly Required,” in which a new year means a fresh start.


Here’s how I expected the beginning of season 2 to go: it would start out sort of rough as it shook off some lingering season 1-ness, it would sometimes find a gear and sometimes slip one, but then around the time of “School Hard” (which is, like, episode 5 or maybe 7?), around then things would really start humming.
Instead it feels like these two episodes come roaring off the line popping a wheelstand.
Everything just looks so much better. Sunnydale High’s halls have, like, a foreground and a background, and people, lots of people, move between them. Someone figured out how to shoot a fight, there’s greater effort put into giving them clever little bits, and shadows and poor lighting (usually) are there to create mood and atmosphere, not to hide cheapness. The Anointed One’s factory lair is big, and it has levels, and stuff in it. Even the vampires are more lively! I’m not going to make the argument that Absalom is a lost gem Buffy baddie, but, you know, his quasi-revival preacher thing is a whole lot more personality than most previous minions got. A great deal of what makes these early episodes a real treat is the sense that amateur hour has been left behind.
We don’t leave the first season behind entirely, though, as there are a few threads left dangling. It probably wasn’t terribly important to check in with the Master’s bones (though in genre shows, it’s always prudent to definitively show someone isn’t coming back, even if that’s not true), but it was terribly important to check in with how Buffy processes the events of the finale and the first season as a whole. That she does so poorly is no big surprise, and if memory serves, there will be plenty of time to discuss Buffy being, well, a bitch later. Here, at least, there’s some implied emotional immaturity in her difficulty in coping, and the many forms that difficulty takes—buying lots of clothes and shoes (Hey! It’s Buffy’s dad again!), but mostly by being snippy, cruel, and dismissive toward her friends, potential paramours, and surrogate parental figures, almost daring them to abandon her. Or perhaps testing them. Point is, her irrationality and unpleasantness has a rational story basis, with a coherence that makes her even more likable.
The other dangling threads are relationships, as Angel and Buffy pull closer together, and Jenny and Giles do the same, and Cordelia takes on greater, non-joke prominence. But there’s also the knot of the Buffy-Xander-Willow triangle. I think the only element of season 1 that was well and truly misguided was Xander’s Buffy crush, or at least the execution of it. He was just such a clueless jack-ass about it, and Buffy was so oblivious, he became really hard to take, so much so I really hoped “Prophecy Girl” would be the end of that story. That wasn’t quite the case, but at least the show makes a concerted effort to play down Xander’s behavior to a tolerable level. Trouble is, his Buffy crush colors, and even dare I say taints his entirely reasonable attitude towards Angel. It’s impossible to divorce Xander’s distrust of Angel from his instant hatred towards anyone Buffy showed any interest in.
Just seeing the title “Some Assembly Required” caused me to fear a second attempt at “I Robot, You Jane,” but this episode also is a notable step up from the previous season, as it’s a bit of the usual supernatural hijinks in the high school setting, but significantly more complicated. It seems at first to be a standard Frankenstein riff, with a couple of deranged horndog science nerds stitching together their ideal girl from corpses, until it’s revealed to be a much deeper Frankenstein riff, with a Creature already animated and begging his creator for a companion. There’s Chris, a sympathetic modern Prometheus, trapped by his misguided attempt to repair a family destroyed by an early death, Daryl, the shambling monster consumed by everything he can no longer be, and Eric, a proto-4chan creepbag who oddly seems driven more by deranged ambition to create beauty—the perfect girl isn’t going to be his, after all. And the ensuing action is marked less by Buffy fighting evil, than by her appeals to these idiots to stop before they hurt someone and damn themselves.
And Cordelia, in her enhanced role, is the Damsel in Distress, a role that is increasingly discussed in some circles lately. BtVS often extends some small sympathy towards its villains, and while we can’t really call Cordy a villain when there are vampires and demons and monsters actually walking around, we can call her an antagonistic presence. Certainly, her archetype, the Popular Queen Bee, is the villain oftentimes, and perhaps making that archetype part of a show with far greater evils was to make the point that there are far worse things in the world than pretty mean girls in high school. Anyway, there are others out there better equipped to explicate the gender theory thinking undergirding a pretty girl imperiled because of her prettiness, but the tensions in Cordelia are significant, and extend her that sympathy. She’s mocked and reviled for her superficiality, but desired for the things that superficiality maintains, and here (this time utterly blamelessly) she nearly becomes a victim of that desire.
And then she nearly falls into the hacky fate of so many Damsels by falling for her heroic rescuer. Luckily, Xander’s jack-assery wipes that cliché off the board.
Posted by Kel V Morris at 2:43 PM