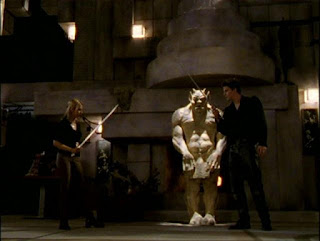 Apex Episode: Tough choice. Really tough choice. I think I ultimately have to go with “Innocence.”
Nadir Episode: “Reptile Boy”
Season 4 Costuming Theory Check-In: Lots of overalls, mostly on Willow, which makes sense, but occasionally on Buffy, too, which is weird, and Xander still has some bad silk prints, but, still, eh, nothing approaching the atrociousness I have in mind. Theory intact!
Posted by Kel V Morris at 12:07 AM