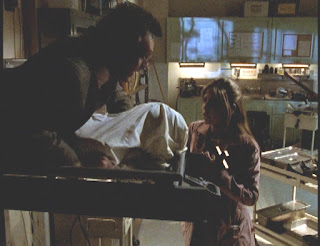 Covering from “Witch” to “The Pack,” in which amid spellcraft, cheer squads, mantis ladies, dates, and hyena spirits, key rapports develop.


Maybe I spent too much time girding myself, but these episodes aren’t nearly as bad as I was led to believe. By no stretch are they perfect, straining with budgets and how to adequately render an action scene (good thing old Doctor adventures prepared me, because the mantis would fit right in fighting the poor, budget-deprived Sixth), and there are some embellishments and tones that don’t quite work (the pack is given a bit more ominous slowmo than is strictly necessary). But they’re eminently watchable such that they aren’t making me impatient. They’re a little primitive, but fun and enjoyable.
Particularly primitive are Xander and Willow. Xander’s early crush on Buffy, to my memory gets alluded to a few times, but I’d never seen it in practice. As far as I’d seen, Xander was entangled with Cordy or Faith or Anya, and an infatuation he had with Buffy was a distant memory. Hol-ee shit is he obnoxious about it here in a transparent and petty and frequently bitter way that I found really surprising, and helped me understand why some segments of fandom always hated him. And that’s before he sexually assaults her while high on hyena spirit (thematic territory the show would have a spotty history navigating).
Willow is, well, very different and much stranger. Given where I came into the show, not only was Willow not into Xander, she was an out lesbian. The creators have always been quite open about how that came about, how it wasn’t particularly planned from the start, and even how they nearly decided Xander should be the one to come out, hence as we’ll see later, it plays for the character as a late-blooming realization rather than something you can comb through her past relationships looking for clues. Yet her reluctance and distant pining, while congruent with her establishment as shy and retreating, also do seem to foreshadow that later development—she can safely yearn for him because it’s obviously never going to happen (in theory, at least).
What gets on solid footing straight away in these episodes, beyond Buffy’s characterization, is the relationship between she and Giles. One of my speculations is that amid all the soapy storms of everyone’s evolving love lives, the thing that kept both show and character moored was Buffy’s relationship with Giles. And the fact that the first real triumph of an episode, “Never Kill a Boy on the First Date,” really focuses on them isn’t convincing me I’m wrong. While it would have been easy for the two to lapse into churlish and short-sighted rebellion and block-headed paternalism, they don’t. Buffy wants some semblance of a normal life, and Giles wants her to keep her responsibilities in mind, and they both make what they think a reasonable concessions to each other. Of course, those concessions prove a bit unworkable, but they don’t lapse into petty recriminations—she values and respects his knowledge and guidance, and which he is eager to provide. If that was all that came from this era, it would more than justify its existence.
And the story of the Master progresses as we meet the Anointed One, who will hold a key place in Buffy lore, though probably not the one they had planned at the time.
Posted by Kel V Morris at 7:05 PM