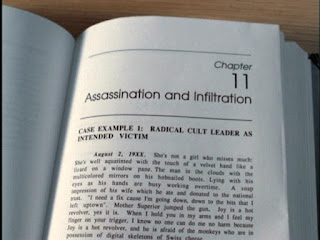 Covering from "I Robot, You Jane" to "Out of Mind, Out of Sight," in which a rough patch cannot diminish some gems.


This was something of a string of surprises, starting with:
Hey, it’s Jenny Calendar! I wasn’t expecting her to show up so soon.
Holy God is her episode bad. Bad in a way that makes me regret being so harsh on “Angel.” Even by the standards of the Late 90’s TV Episodes Warning Us of the Perils of this “Internet” Thing genre, this sucks (Note: I’d include any currently-airing police procedural that involved a video game in that genre). And Jenny doesn’t help out much—Giles is only 70% incorrect when he calls her “that horrible Ms. Calendar.” I could have happily gone through life without the term “technopagan,” especially since that appears to only mean “We use a chatroom for ritual magic.” Not that Giles cloaks himself in glory with his bizarre umbrage at the idea of a digital catalogue and his even more bizarre paean to knowledge imparted via physical media being “earned,” somehow? Whatever. Between Buffy nearly dying because she decides to blunder into the boy’s locker room and turn off a shower to a demon downloading into a robot, we’re a pretty far cry from Black Mirror. Some would say “I Robot, You Jane” is the worst episode, but I’m not quite willing to crown that yet.
And then, oh, it’s Principal Snyder. That wasn’t a huge surprise, he had to show up sooner or later. I hit a real rough patch here, because while his episode had the good sense to realize how silly it was (and half-heartedly imply he is a demon!), its joke—killer dummy isn’t a killer dummy, but a trapped demon hunter—wears thin pretty fast, since the extra joke is that the demon hunter is from the 30s so he speaks like some sort of Catskills comic noir detective who sexually harasses 16 year olds. And unfortunately, the episode is pretty much just the joke.
Then, the biggest shock of all—there was a dude who played Buffy’s dad! It’s almost comic in later seasons how little of a shit was given about Buffy’s dad, to the point that, much,  much later, they decided not to have him show up when he really, really should have, sealing his characterization as a truly titanic piece of shit. So, even weirder than Xander’s obnoxious take on crushing or cowering Darla was seeing the show spend time on Buffy and her dad.
Though they are an important element of fantastical and horror fiction, dreams are tricky business, and often I dislike them, especially when they’re too lucid or used for cheap foreshadowing. Cryptic Riddle Talking Crazy People are worse though. Anyway, despite how leery I am with dreamscapes, I quite like “Nightmares,” the show’s first foray into that territory. Of course, part of that is because the episode isn’t just a plunge into dreams, but has them bleeding into reality, and I do love being playful with reality. Being smart viewers, we’re aware of when a character blunders into their nightmares, even when they’re as prosaic as Buffy’s dad arriving and gradually telling her she’s responsible for her parents’ divorce, but it’s still fun to watch the blundering happen—as much as such a thing can be called “fun.”
And lastly, hey, is that Clea DuVall? It is! I should really watch the rest of Carnivale one of these days.
The remit of BtVS, it is well known, was adolescent worries metaphored into supernatural stories. In my view, the more subtle the more effective, and “Clea feels so invisible she becomes actually invisible,” is not exactly subtle. Luckily, there’s a sadness to her plight, a lack of malice (mostly) from those unwittingly responsible, and a real terror in her rage which makes “Out of Mind, Out of Sight” quite effective. And it gives Cordelia some of the depth I knew she’d inevitably get. Her status as a joke remained unchanged since the first episodes, but here she explains to Buffy her own alienation, insecurity, and pressures. She even, in a hyper-privileged and self-absorbed sort of way, hits upon the central theme: It’s hard to excuse violent retribution. But violent retribution, harsh judgement, and cruel cliquishness are hard for teenagers to resist. Tellingly, when Cordy comes to the gang for help, they’re all more than happy to blow her off, and Giles, the adult, is the one who has to welcome her in.
Since I don’t think these events are terribly relevant to the episodes they effected (ok, one has enough parallels to make it ill-timed), I think it’s important to note here, a scant few years later, episodes were delayed is response to the Columbine shooting. It’s hard not to think of that fact, watching Marcie plot her inequitable vengeance. Then comes the ending. BtVS often employs the horror movie trope of the illusion of restored over, only to reveal the horror continues on!, and it does so here, as Marcie is taken by shadowy government types for training as an assassin. And really, that trope is all I think Whedon and company were going after here. Yet. Yet, sitting here today in 2015, many years after Columbine, hardly one after Newton, with a culture where many are convinced the best protection from guns is more guns. So when I see Marcie, angry, crazed, alienated Marcie open her killer textbook, I also can’t help but think of how forces seek to exploit adolescent rage.
And I finally can’t help but think how we may be better off if those forces had taken the form of the CIA training invisible girls to murder cult leaders.
Wow. That got surprisingly dark.
Posted by Kel V Morris at 10:23 PM