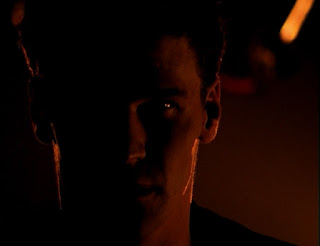 Covering “Angel,” in which it becomes clear there is now a plan for the character.
I wonder how the earliest fans would react if I could go back in time and tell them the show would last for 7 seasons, and that Darla is one of the most important vampires in the mythos. Actually, I don’t wonder that much. I’m pretty sure they’d be very confused.

But she is quite important, because she sired Angel, though that isn’t said in this episode (and this wouldn’t be the last oddity and alteration of vampiric lineage). And Angel may be the best idea Whedon has ever had (certainly better than “What if Star Wars had, like, three Han Solos?”). He’s the character who takes the show to the next level, introducing greater philosophical heft and grander story possibilities, while giving the mythos a rich sense of history, and leading to other characters who are among the show’s best, including poor unceremoniously dispatched Darla. Without Angel, I don’t think the show would be as fondly remembered as it is today, indeed, if at all.
Even though ultimately BtVS is part of the modern romanticization of vampires, the existence of Angel puts the show in the Romantic tradition (where I feel vampires work best), and elevates it above the often vapid self-loathing escapism we find in the “Teen Paranormal Romance” book section. He lets the show tap into the most resonant use of vampires, their fundamental ambivalence: you want to be one because they are cool, but you don’t want to be one because they are monsters. There is an inescapable tragedy to their existence. By adding the concept of “vampire with a soul,” the show enters a more complicated moral universe, and prompted, I’m sure, thousands of hours of dorm-room philosophizing on good, evil, choice, freewill, intentionality, and the ins and outs of an ethical existence. It introduces a means of thinking about characters that would extend far beyond Angel. Furthermore, he gave the show a more tangible sense of history, an epic, century-spanning sweep the show currently lacks, despite all the talk of the ancient and eldritch. And, of course, there’s his role as a lowercase romantic figure to get into, which we’ll save for later.
Unfortunately, his grand coming-out episode is…it’s not too great.
Not awful, mind you. Darla’s scheme to play Buffy and Angel against each other is suitably clever and self-serving—it relies pretty heavily on coincidence, but air-tight plotting is never going to be a trait associated with BtVS, and isn’t something I give much of a shit about anyway. The reveal of Angel’s vampire-ness is well-timed and handled, and as a repeated presence on the show (also, his appearances since the premiere abandon the smugly dubious ally persona in favor of the broodiness we all know and love), the investigations into his past have additional weight investigations into monsters of the week do not. And the relationship between Buffy and Angel starts pretty solidly and doesn’t elicit groans—always a good sign.
But when it comes down to actually explaining Angel’s nature, well, it’s a lot of exposition. Fair enough on that, it’s tough to “show” a soul, and even if the show’s budget could have handled a flashback (clearly it could not), such flashbacks are best held for later. Still, there’s no avoiding that the episodes climax is largely people talking in a darkened room. Angel talks about what he is. Darla talks about what he is. Buffy warily circles both. And then, seeming to grow as tired as we are, Darla whips out a gun and starts shooting, a clever move I’m pretty sure only one other villain tried, but we’ll get to that unfortunateness later. Then Angel unceremoniously and rather vaguely to be honest kills Darla. It’s a testament to the strength of the ideas and how vastly the show improves that they still shine through.
A more critically injured by the budget idea is the Master. The idea of the Order of Aurelius just requires more fuel than it’s getting. While the Master expounds on family, and you can see how it would be some cool parallels as Buffy builds her “family” while the Master’s gradually dwindles, the Order is pretty spare to begin with—while the Master’s howls of rage express both the loss of Darla, his favorite, as well as the loss of half of the people he talks to regularly. Otherwise, it’s a bunch of single-episode scrubs like The Three, whose badassery we are told all about after they’re defeated, just before they’re killed. They get treated better than Zachary, though, whose existence and death both happen off-screen. When it comes to crowd shots and regulars, there’s little doubt that little money was better spent on the high school. But it still kneecaps the Master pretty badly.
Good thing there was a bit more compelling baddie in the waiting.
Posted by Kel V Morris at 3:45 PM