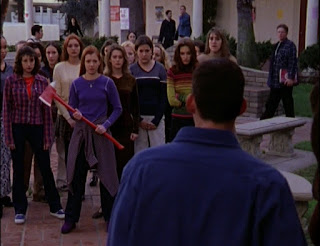 Covering “Phases” and “Bewitched, Bothered and Bewildered,” in which the boys and their relation to the girls get some focus.


A brief dive into the fandom experience, and an Oz story: In the days before big time Comic Cons came to town, there was a much smaller and more game-focused con, that reserved some time to demo more obscure titles in the midst of the D&D competitions and Vampire LARPs, and so on a whim while I was attending and because I’d perused the rules but they didn’t make much sense, I signed up to play the Buffy RPG for an hour or two.
The GM had created an adventure taking place somewhere in this back end of season 2, and we were all playing established characters—the first player grabbed Buffy, obviously, the second grabbed Giles, so I, wishing to throw a curve ball, picked Oz. This proved to be a big problem, because the two others, who had the proactive characters who should be driving the action, seemed constitutionally unable to do anything but sit and wait, while I was playing someone who, in the form of Willow, had a very strong character reason to not care about events. Compounding this, the adventure involved being displaced in time and meeting the Kalderash princess Angelus was soon to kill, so, I observed, I really should have been playing Xander. Instead, Oz inexplicably became less of a wry punch-roller and more of a hard-charging leader for a little bit.
I share this because “Phases” seems like the perfect time—it’s the one where Oz becomes a rather horrible rubber werewolf. And that’s basically it, he’s the werewolf, Willow is assertive, and it’s pretty good, but with nothing too remarkable. Well, except for Larry, who is introduced here and, notable given where the show would go, becomes its first out gay character. Does his coming out scene veer too far into gay panic? It may well, though the joke mostly stays on Xander’s befuddlement as he thought he’d extract a dangerous secret from Larry, not expecting to receive an earnest one. But Larry seems, at least to my thinking, to reflect an aspect of being closeted in high school in the 90’s. My class, which had graduated the year before “Phases” aired had one out and proud gay kid, and while he wasn’t a hulking bully like Larry, he had been, previous to his coming out, known for some overly-piggish and leeringness which, it obviously turned out, was all performative. Surely, there are still kids out there that still feel the need to put on a Larry show of straightness, but gayness seems so much more normalized in our society now, I wager there are many more out and polite Larrys than rude and crude Larrys these days, and BtVS contributed to that.
I’ve been pretty harsh on Xander, primarily because for most of the first season, he was a real overbearing jackass. So it may seem strange for me to give him some praise in an episode where he meddles with the dark arts and ends up eliminating consent throughout the entire town. Yeah, using a love spell is pretty scummy and stupid, as Giles is quick to point out. But at the same time, there’s some sympathy and universality afforded Xander’s impulse—he gets dumped, he’s hurt, and he finds himself asking not “How do I make this person like me?” but rather “How can I get this person to like me again?” Compound his hurt with the humiliation that accompanies it, and there’s much more sympathy for Xander’s plight than when he was futilely negging anyone Buffy showed interest in.
Still, while there may be some sympathy, Xander’s spell is horrendously wrong, aligning him firmly with the BtVS tradition of idiots who employ the supernatural to handle their pain and end up in over their heads. But to Xander’s credit, and what makes him one of our immature protagonists and not a skeev, is he stops digging right away. As soon as he realizes that the spell went wrong, he’s uncomfortable and tries to reverse it, and as soon as his efforts to do so don’t work out, he confesses all to Giles to make things right. And he does all this before he’s in any real danger, or has to face any ramifications. Most importantly, he instantly realizes that exploiting this circumstance would be a violation, and, to him, false.
There can be a pretty strong temptation to read this episode very literally, and the episode doesn’t exactly dissuade that reading when Buffy tweaks Xander over “invoking the Roofie Spirit,” but even though the consent aspect must be kept in mind, there is also an undercurrent of adolescent wish fulfillment—“I wish all the girls liked me.” As Xander discovers, well before Willow is swinging an axe at him and Dru is offering him dark immortality, the wish actually sucks. Despite what a bunch of greasy MRA warriors will claim, unwanted attention is actually quite uncomfortable. We all, at times, dish out unwanted attention, and, unless you’re a greasy MRA unwilling to change your basketball shorts I guess, we receive it, too, and after this, Xander probably understands what it’s like to receive enough to dish it out less.
Also, the episode is really damn funny.
Posted by Kel V Morris at 12:52 AM