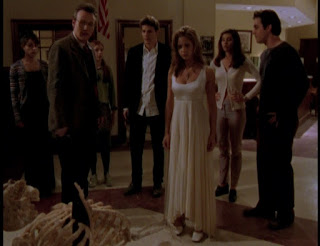 Covering the finale “Prophecy Girl,” in which the world does not end, but season 1 does.


Like I said last time, I think BtVS works best when subtly mapping high schooler issues onto the supernatural, and right on cue comes “Prophecy Girl,” the season 1 finale in which the world is ending. It’s ending because the Master will soon escape, heralded by dark omens of dogs birthing snakes and the earth being rent asunder, and it is so written in the Codex that when Buffy faces him she shall die. The end of the world! Also it’s ending because Xander asks Buffy to the spring dance, as like a Date date, and she re-uh…rejects his advances. Argh, it’s the end of the world! And then Willow gets fed up with being a perpetual doormat and tells Xander, her bestest bestie, off (in a very Willow doormat-y way, at least). OMG, it’s the end of the world!
The stakes are a bit higher for Buffy, obviously—while all three feel like they could just die, Buffy’s the only one who does. But there is a connecting thread of being consumed by despair and emotional turmoil that is much more effective than had the Master more obviously represented despair and the Anointed One emotional turmoil. Xander mopes in his room. Willow keeps trucking on, but she is extra morose about it. Buffy shouts at Giles and rejects her Campbellian call again, says she quits and tries (half-heartedly) to run away. But they are all roused when they are confronted by greater problems, and in the process find that their earlier drama was just that—trivial drama. Despite what Codexes and hormones say, the world is only going to end if you let it.
Prophecy is a pretty regular trope in supernatural and horror fiction , so it was inevitable BtVS would involve them—indeed, these episodes have all opened with an explanation that sounds awfully prophetic (“In each generation, there is a Chosen One!”). The show comes from the Eowyn school of thought, treating prophecies like Deconstructionist semantic traps, rife with mistranslations, dependent on weird contexts, often duplicitously made, and unable to account for modernity or facts on the ground. Here, the Master barely gets to gloat over how the prophecy tricks Buffy before it turns on him and screws him royally, because Aurelius or whoever didn’t account for artificial respiration.
But before that, the prophecy serves to force Buffy to confront her mortality like she hasn’t had to in a while. An early death is one of the less desirable Slayer perks, a likely consequence of fighting evil all the time, and is one of the first she mentions in “Welcome to the Hellmouth,” so we know it weighs upon her, but she doesn’t mention it often while she’s fighting evil, probably because the show is fun, and moroseness isn’t very fun (Significant Look). But the prophecy isn’t a hypothetical inevitability (so she, and Giles, and Angel, and Jenny think), it’s quite concrete, all but time stamped. And she reacts in obvious, and legit ways—lashing out, and trying to flee. It’s short lived, though, as Willow stumbles upon a tableaux of what awaits the world should Buffy actually quit, so she rallies. I’m not dissuaded from my thoughts on the show’s real foundation by the fact that the ensuing scene, where she has to knock Giles unconscious to keep him from eschewing the prophecy by fighting the Master on her behalf, is probably the episode’s best.
The Master himself. I discussed some of the character’s issues in “Angel,” and they’re brought into stark relief here. His set is real cheap, and has to be shot with the actors in close-up. Know where you should shoot an action bit? Typically, it isn’t in close up. SMG and her double (the difference often hilariously obvious in HD) have been really great with Buffy’s necessary physicality, it’s mainly the way it’s filmed that’s been the issue. Anyway, the Master has spent most of the season on this cheap set, removed from any action, and the limited number of episodes in turn limited his appearances, keeping him from developing much presence. He’s felled more by budget and time than execution. Here, however, is the episode they decided should claim the lion share of the budget, with vampire crowd shots, Cordelia smashing walls with her car, and the delightfully cheesy Hellspawn (unlike the mantis lady, the 4th or 9th Doctor would be proud to face the Hellspawn).
And with that, season 1 ends. I don’t think it rocks too many boats to say there are grand things on the horizon, though.

Apex Episode: Pretty sure this defies convention, but I’m going with “Out of Mind, Out of Sight.”
Nadir Episode: I mean, it has to be “I Robot, You Jane,” right? Yes, yes it does.
Season 4 Costuming Theory Check-In: Since we’re in a very mid-90s minimalism, no one stands out as too egregious. Cordelia and Jenny show up with slightly crimped hair (a look which I recall may have come back for about a week and a half?), lots of silk, and all of Xander’s printed shirts are awful, but, eh, this is mostly just dated, and not even dated enough you’d notice if you passed any of these people on the street. Except for Xander’s awful print shirts, of course. The Season 4 Theory remains intact.
Posted by Kel V Morris at 12:37 AM