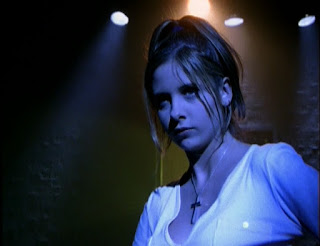 Covering “Welcome to the Hellmouth” and “The Harvest,” in which we meet beloved characters. Sort of.


I’ve never particularly considered BtVS’s early episodes especially required viewing. Most of the truncated first season I’ve never seen, and though I have seen these two (Netflix helpfully confirms), I didn’t remember much about them. There were some fights with vampires, probably involving the Master? Seems like a safe assumption. And really, after a fresh viewing, that’s all it is. Most of the time is spent establishing concept, characters and locale, and the concept, at least, is right there in the title. We needed to see the establishment, obviously, but, still, it doesn’t require a lot of front-loaded mythos. Vampires. Chosen slayer of said vampires. And there’s a dimensional portal. There’s also some talk of the Slayer possessing more arcane quasi-mystical powers that the show never went too deep on, which may have been an abandoned plotline, but more likely was just a nice character beat.
Isn’t it important to know who the characters are, though, so shouldn’t you start with the first episode? I’ve had this discussion, and I think BtVS makes a strong case for “not always.” Especially in the early offerings, everyone has a simple enough archetype and role that they are instantly understandable. That may sound like a backhanded insult, but it’s not, I think it’s actually a pretty good thing, at least when it comes to sharing the Buffy experience—you can encourage people to jump straight to the good stuff. One downside of the age of extensive serialization is that you often have to tell people to watch a lot of dreck so they’ll have the proper context when things get good. Here, wise mentor. Goof. Shy outcast. Queen bee. If you knew nothing of the show, and just had a cast photo and those descriptions, you could pick out who was who.
And besides, as is the nature of pilots, just about everyone is just slightly askance from what I was accustomed to. Willow had a few lines that sounded like they were intended for an outcast just a touch more bitter and acerbic than Hannigan would ever play her. Xander probably wasn’t supposed to be quite this much of a whiney dick at this point in time (or, plenty will argue, he was). Cordelia is basically just a joke, and quite a bit dumber than I was used to. Giles is pretty much Giles, though it was odd, if not unexpected, to see he and Buffy at this disrespectful stage. Oh, and apparently Xander and Willow had a bestie named Jesse, but since I didn’t remember Eric Balfour (he was a thing in the 90’s?) was ever a part of the show, it was pretty apparent he’d be dead meat before too long.
The characters that were the most off, however, were the vampires. Granted, I’m pretty sure the Master doesn’t cover himself in glory as a Buffy baddie. I believe it’s later said that Angel was putting on a show, but it’s straight up bizarre watching a character who sturmed and dranged his way broodfully across two shows acting the part of a roguish and rakish ally of dubious motive, so bizarre I wonder if there was any plan at all for the character at this point. I’d venture not, because here Darla is a simpering and inept hench, outranked by Luke who I don’t think ever gets mentioned again (not the biggest loss), without a trace of towering sociopath matriarch.
Buffy herself, however, is on point, from the resentment of her burden to her eagerness to take it on so others don’t. After all, it is her show, it isn’t called The Scoobies, so she better be on point. That character moment I mentioned earlier is hers, as she eschews the traditional powers and roles of the Slayer and sniffs out a vampire based on his outdated clothes (though, to be frank, they didn’t look all that much more outdated than anyone else, though I guess it was more how he was wearing than what). She’s confident but nervous, glib and inventive, and yearns to be trivial but tragically can’t. At least in these first two episodes, Buffy is clear.
The scaffolding of dominant themes also get built. Buffy is introduced already struggling with normalcy (on her Campbellian Hero’s Journey, she is firmly in Rejecting the Call when we first meet her, which is interesting structurally—her Call to Adventure happens off-screen, or in the movie, I guess). High school’s absurdities and cruelties rear their head. Demonology has a very clear Lovecraftian tinge (and the Old Ones get their names dropped). Jesse’s transformation allows him to darkly act on his male entitlement. The monsters are often wry and put-upon. Willow and Xander witness how the norms all around them rationalize and ignore what they’ve seen in ways Douglas Adams often also saw.
Despite season 1’s reputation, I didn’t find these two episodes distractingly cheap-looking. Maybe it’s the fact that they’re so old now, or maybe I’ve become inured from so many old Doctor Whos and really old Doctor Whos, but despite some awkward sequences, some less than inspiringly staged action, and pre-HD cameras, these two looked ok. Their score is pretty terrible, but visually, this isn’t unwatchable. In a way, the abrupt transitions to vampire shape, with as little expensive CG morphing as possible, is a more horror movie move than what the show would later adopt, as if they always appear to be monsters, and you just refuse to see them until it’s too late.
Ultimately, I came away from “Welcome to the Hellmouth” and “The Harvest” feeling like the show wasn’t having to waste a lot of effort in doing what it wanted to do. And for first episodes, that’s a very good sign.
Posted by Kel V Morris at 8:38 PM