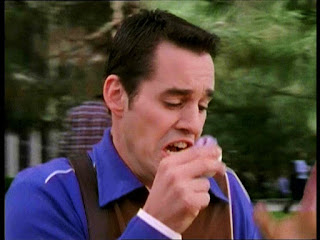 Covering “Ted” and “Bad Eggs,” in which, hey, we got John Ritter! That’s something, isn’t it?


The thing one tends to forget after a decade and a half of shows that generally escalate and escalate and keep on escalating, moving from high to high to high is that it used to be much more common for a show to have highs and lows, drama-wise. There was also a planned ebb and flow, as weaker episodes would get crammed in between stronger efforts, in addition to more stand-alone efforts resting between arc-heavy outings. And that’s where we find ourselves now, coming down big time after Dru and Spike’s seeming defeat.
So to spice things up, hey, doesn’t special guest star John Ritter doing The Stepfather, sound great?
What’s that? No, it doesn’t?
No. It doesn’t.
By virtue of not being particularly good, “Ted” heralds a trend in how latter-day BtVS episodes get received, as they stopped being particularly good, but would feature delightful scenes with characters we enjoy. So it is here, where in the midst of the muddled mess that is “Ted,” we get the hilarious business of Jenny and Giles reconciling after the events of “The Dark Age.” She is quite funny as her inexperience with the crossbow gets Giles shot in the back, and he is superlatively bad ass as he pulls the bolt from his back and stakes a vampire with it—Giles is probably the most competent combatant among the Buffy-verse’s mere mortals, which actually doesn’t place him very high, but in terms of bad assery, a function of will and flair, I think there’s a good chance that Giles is #1.
But that’s a scene or two amid a muddle that has Buffy act either childish or psychotic depending on the angle as the goofily parodic Ted invades her life, only to try to turn deadly serious when it looks like she kills Ted in a fight, which is a bit too much for the episode to handle, especially in the time remaining. She mopes and angsts around a bit, Joyce seems to act mostly disappointed, like Buffy broke an heirloom, and the others have an all-too brief conversation about the ethics, responsibilities, and limitations of Slayer power until, whoops, turns out Ted was a robot (again with the robots), and Xander explains what was going on through an avalanche of exposition in the episode’s last minute. Focused as the show is on character and the problems of teenagers, “Mom is Dating a Monster!” was an inevitable story to do, and further one that examines the ramifications of Buffy using her strength rashly was a necessary one, but combining the two was probably unwise. You’d think at least Buffy would realize something was up with Ted when she didn’t drop him with one punch. But it’s still got that really good Giles and Jenny scene.
And that will eventually become the refrain—“but it’s got…”
As for “Bad Eggs,” it’s a perfectly agreeable Body Snatchers riff with a soupcon of Aliens, nothing great to commend, but nothing awful to condemn, and it’s nice to see some members of the Wild Bunch made it out of the battle at Agua Verde, well, not alive exactly, but they walked away.
Basically, I just dealt with these two as a bit of throat-clearing for what comes next.
Posted by Kel V Morris at 6:59 PM